The Great Elephant Project has an ethos of saving elephants by helping people. In verdant Sri Lanka, this incredible volunteer program exists with the aim of preserving the stunning wild population of Asian elephants that roam in the Wasgamuwa region of the beautiful country. To do this, they work to alleviate as much Human-Elephant conflict that occurs in Sri Lanka as possible, which both humans and elephants fall victim to.

In 2009, the 26 year-long civil war that had been occurring between a rebel group and the Sri Lankan government finally subsided. However, during that time, violence and terror was so extreme that many communities had to be fragmented and relocated, resulting in an invasion of elephant territory. Additionally, growing populations intensified the competition for available habitat for both humans and animals. Settlements in elephant habitat mean that the two worlds continuously collide, and the consequences of such conflict are nothing short of volatile.

Check out this short video which explores the extent of Human-Elephant conflict in this beautiful country. The Great Project's very own marketing team member, Ellie, visited the project and witnessed this conflict for herself.

Below is a more detailed account of all that Ellie learned during her time in Sri Lanka regarding Human-Elephant conflict. 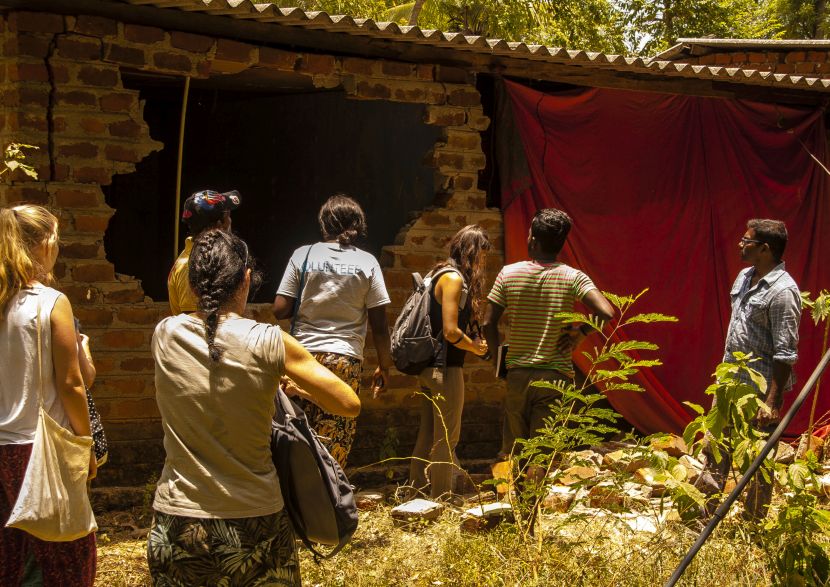 As the forest homes of the giants become fragmented and populated with humans, water and food supplies for the animals dwindle too. The elephants are drawn to communities by fruit, vegetable, rice and water supplies. Fruits and rice are not naturally available in the forest, so the presence of fruit in dung found during dung transects is an indication that elephants have been raiding crops; as such, dung transects are a key activity in the monitoring of Human-Elephant conflict (HEC).

Of course, elephants are very large animals, so an ‘ele-raid’ (as called by the locals) leaves behind it a trail of mass destruction. During my short trip to Sri Lanka recently, I was able to witness first-hand the devastating effects of HEC. There were three stories in particular of HEC horrors which were most affecting and pertinent. 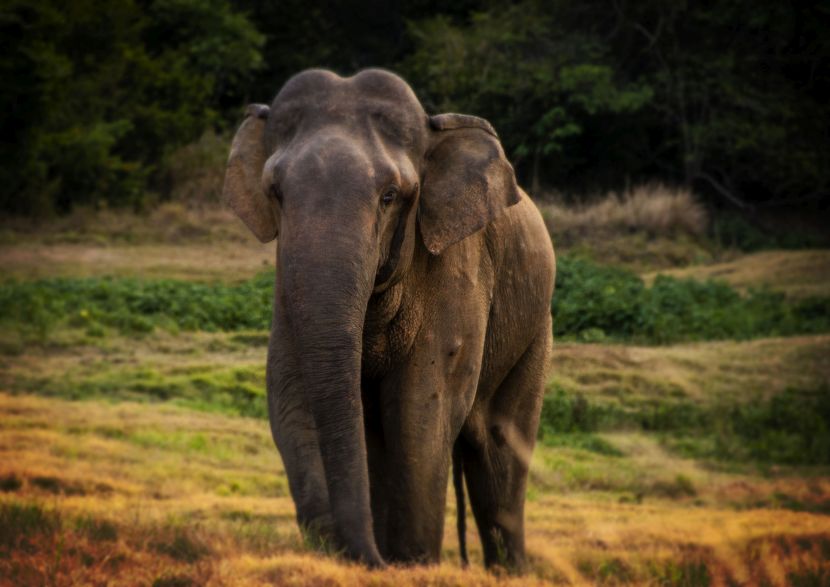 On a warm weekend in Sri Lanka, the men in the local village were drinking and socialising. When it came to going home, one man, in particular, was too drunk to make it to his front door and fell asleep just outside. During the night, the elephants paid a visit and unfortunately the man was trampled and passed away.

A Mother, A Baby And A Well

A mother who was caring for her 8-month old baby was caught in the midst of an ele-raid, and with no trees to climb, she was forced to hide in a well. The well was deep, however, so the poor lady had to hold herself up in the well with her legs and one arm, whilst using the other arm to cling on to her child until the elephants left. Luckily mother and baby were unharmed, but this experience was certainly traumatic none the less.

During a visit to one of the local farms, I chatted with the owner who explained that his brother lived in a hut just opposite his own on the same plot of land. However, over the course of 5 years, his house was completely destroyed by elephants. Homeless, the farmer’s brother had to relocate his entire family and find another means of making a living. 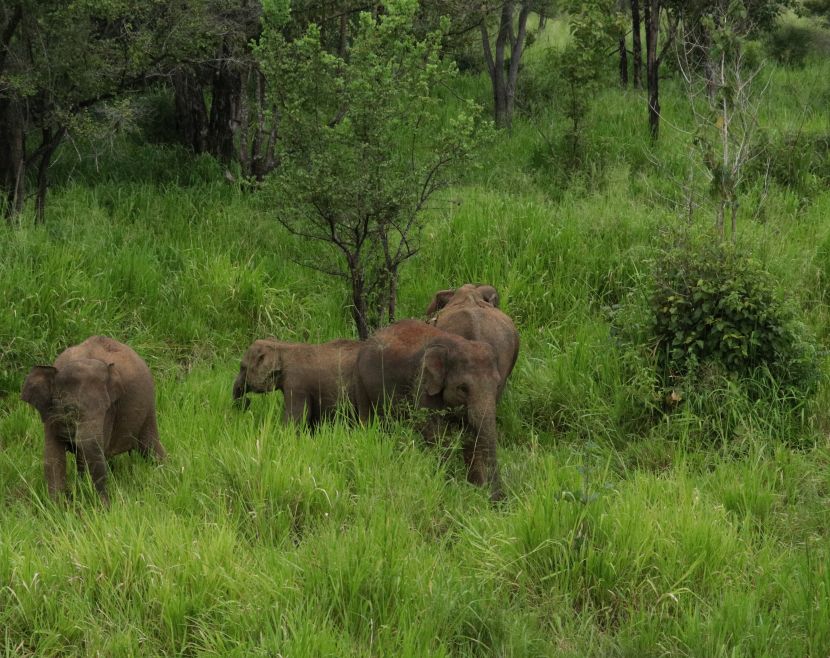 From these anecdotes, it could easily be interpreted that the elephant is the villain in these circumstances, wreaking havoc and terror in local villages, but this is simply not true. The most moving part is that the locals hold no resentment to the elephants at all.

The truth of the matter is, when HEC occurs, it is, in fact, the elephants that draw the short straw. As a direct result of HEC, between 60 – 80 people die every year, but up to 200 elephants are slaughtered. Often, villagers have no choice but to kill the elephant in order to protect their homes and families.

Staff and volunteers at The Great Elephant Project work tirelessly to try and alleviate this issue. During your time on the project, your morning activities will be spent conducting activities which are put in place to try and resolve the conflict or help locals who have suffered as a result. Perhaps the beauty of this project is that everything you do protects both animals and people: two entities that outside of this program are so divided, but within it, show hopes for prosperity and harmony as one. 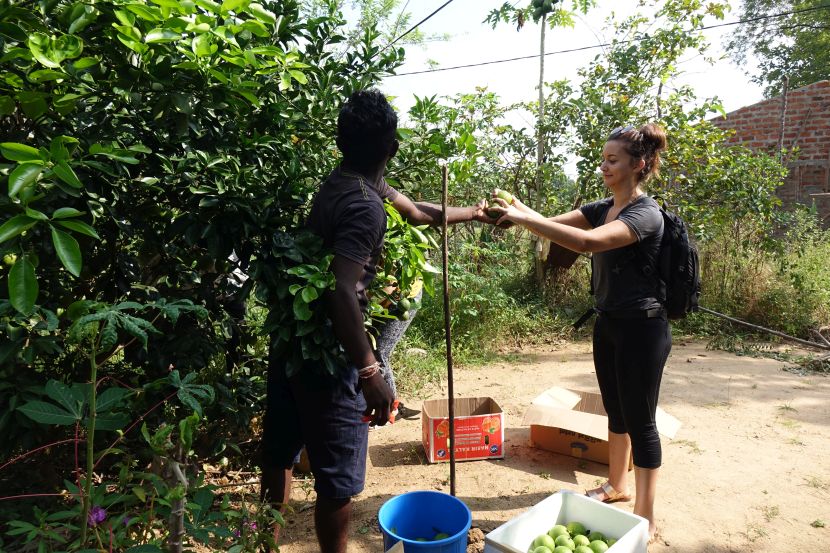 For those of you who don't know, elephants have a distaste for oranges, so the project thought of a genius initiative of cultivating orange trees around communities to act as a bio-fence against ele-raids. We brought you news of this awesome story a while ago, and while I was out in Sri Lanka I got to witness Project Orange first hand. The volunteers had completed much of the work that was needed to be done the week before I arrived; however, we took a trip to one of the farms to map out the orange plants, as there is always more to be done!

After speaking with the farmer, it became clear just how incredible this project was in the efforts to reduce HEC. Upon researching the project before I went out there myself, I was extremely impressed, but witnessing the work first hand was a completely different experience altogether; one that words cannot describe. What I didn’t realise, was just how vital volunteers are to this project as they are the motivating force behind this fascinating initiative.

Regular visits from volunteers keep the locals motivated to play their part in running Project Orange. Farmers enjoy visits from Westerners, and when we were there, the owner of the farm was apologising that he hadn’t weeded his land!

He also explained that he does not resent the elephants for destroying months’ worth of farming, or for damaging his property – I found this sentiment fitting, as he sat below a poster of elephants at a watering-hole, the image titled ‘I Love Sri Lanka’.

His response to my question of whether he feels negatively towards the animals was short and sweet, he simply said: ‘they were here first’.

Project Orange is proving to be the most effective solution to HEC. The oranges are cultivated organically, the locals can sell them on for a profit, and there has been a significant reduction in ele-raids since its inception. 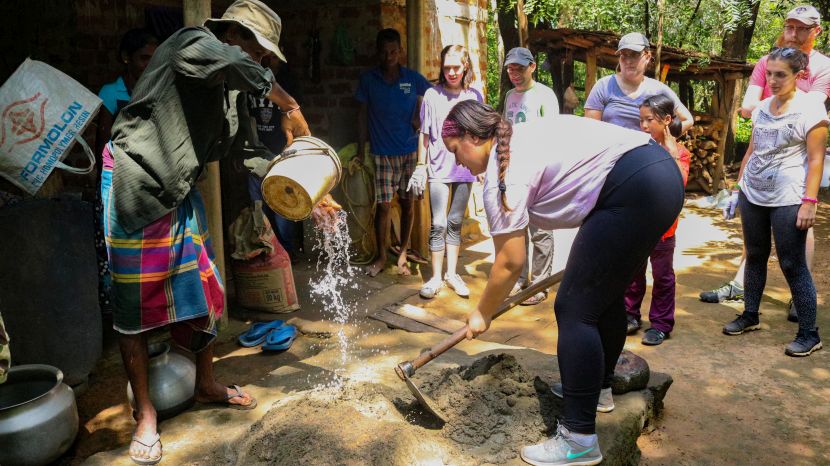 There was a local villager who had one wall of his home destroyed by an elephant raiding the house for rice. Volunteers all chipped in to sort through damaged bricks and recycling those that could be reused, making cement, and putting the wall back together.

The owners of the house, again, were so grateful for the volunteers and welcomed them with open arms. The heat was intense this day, yet looking around I was surrounded by bouts of laughter and smiling faces. Teamwork makes the dream work! 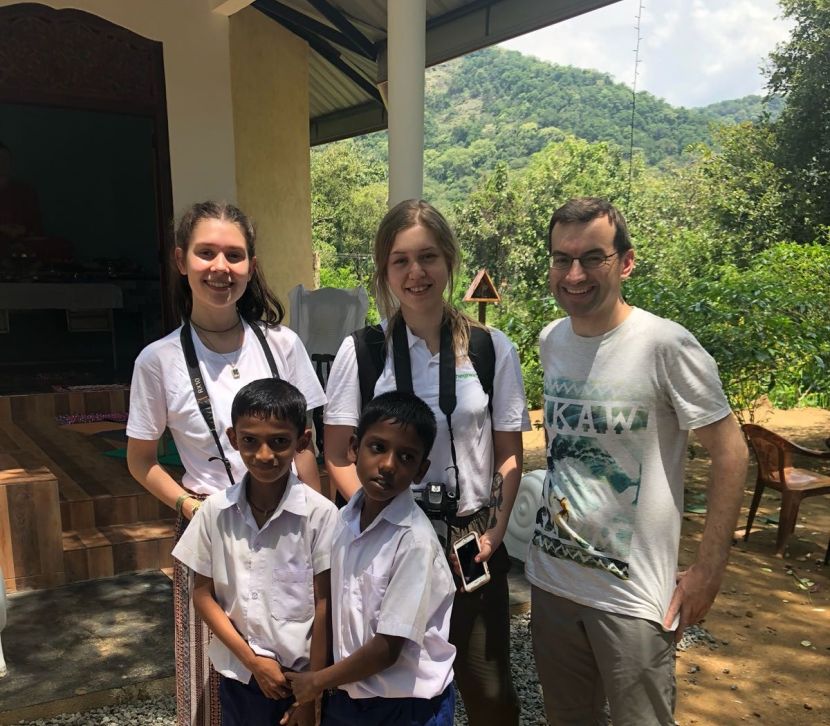 We were also invited to the opening ceremony of a Buddhist temple that had been built in the local village. The project and other organisations gathered donations from volunteers to build the temple for the local villagers. Prior to this, they were having to walk 3km to a temple where they would have to pass through an elephant corridor. As they would go to pray after 6pm, the locals were very much in danger of running into an elephant on the way at this time of night.

It was such a pleasure to be so warmly welcomed by the locals, playing with the children and taking selfies! We were also given traditional Sri Lankan sweets, involving oil cakes, coconut rice and so much more. It was absolutely delicious!

In just 3 days, we had completed 3 separate tasks all with the aim of reducing HEC. Volunteers complete a different activity every morning to achieve this, and words do not give justice enough to how much of an impact this project has on the local communities. It is patently obvious how grateful the locals are, and also how much they respect the elephants, despite the extent of the conflict between our world and theirs.

Kanchana Waidyajeewaka commented 2 years ago
I think that your effort is really appreciable. wish you all the best on your projects.
Reply 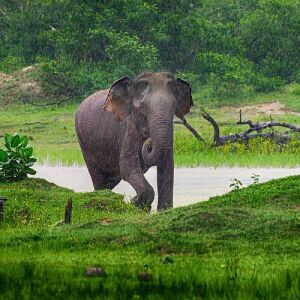 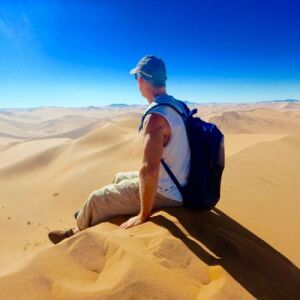 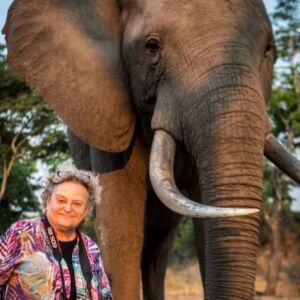 Read on to learn about the latest goings-on at the Rhino and Elephant Conservation Project, from a fun new competition to a visit from a very famous face... 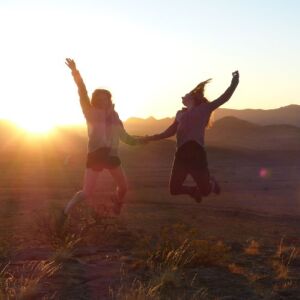 Read on to learn about the latest goings-on at the Rhino and Elephant Conservation Project, from a fun new competition to a visit from a very famous face...

A Big Thank You To Our Supporters This International Orangutan Day!

This International Orangutan Day, we would like to thank...

Kopral The Orangutan Moves Onto Island 3 During Lockdown!

Whilst the orangutan rehabilitation centres may be closed...