Thanksgiving 2016 - The Peculiar Tradition of 'Pardoning' a Turkey 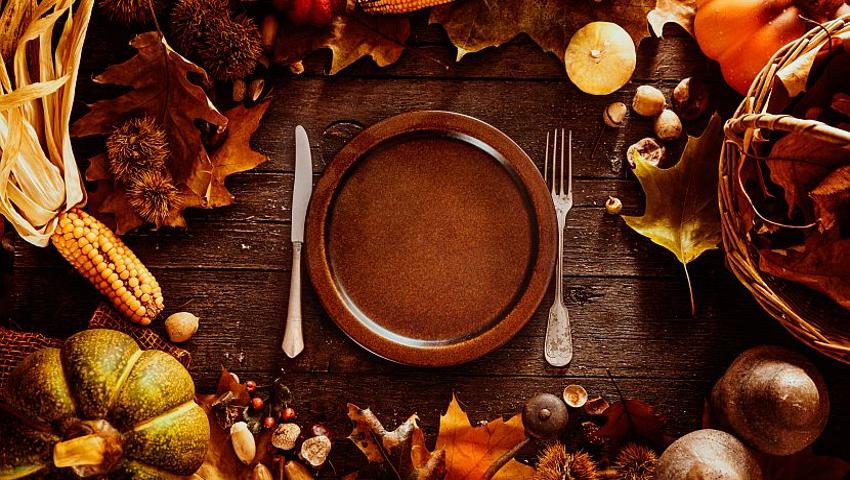 Today is Thanksgiving, and families all across America will be celebrating this famous occasion. Thanksgiving has been an integral part of American culture for centuries, with roots as far back as 1621 when the Plymouth colonists and Wampanoag Indians settled to enjoy an autumn harvest feast together. It’s a time to celebrate togetherness, to give thanks for all that you may have, and – of course – to chow down on some delicious autumnal grub!

November 1863 marked the official beginnings of Thanksgiving as we know it, with President Abraham Lincoln proclaiming that every forth Thursday in November from there on out would be considered a federal and national holiday. But did you know that Lincoln is also considered responsible for another, more unusual, pastime? It is here where we begin a conversation on the very kooky (and oftentimes controversial) tradition of pardoning a turkey.

‘Pardoning a turkey?’, you say. ‘I thought that presidential pardons were reserved for more serious matters like, you know, unfair sentencing and such.’ But perhaps that’s exactly what the tradition is all about – the releasing of a bird, from a death sentence they do not deserve. And maybe that’s why a clemency between Lincoln and a turkey, hails as a catalyst for the pardoning we know today. 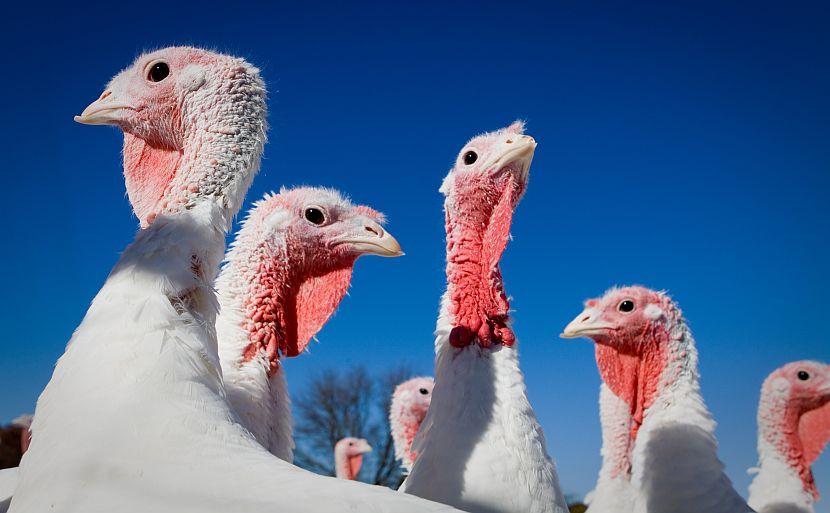 Legend has it that, around Christmastime 1863 (and therefore shortly after Thanksgiving earned its name as a national holiday), a live turkey was delivered to the White House. It is said that Lincoln’s son, Tad, became very attached to the bird in the run up to Christmas – so much so, that when the young boy made a plea to his father not to kill the bird, Lincoln listened and opted to spare the turkey’s life. Instead of ending up on the plate of the president, the fortunate turkey (apparently named ‘Jack’) became a beloved pet to the family, and would be walked around the White House on a leash like a dog…or so the story goes.

When it comes to the ‘official’ tradition of pardoning a turkey on Thanksgiving, the tale is often attributed to a number of other presidents (from Regan to Kennedy, and so forth – those are stories we’ll let you research on your own!); however, the only proven origin we have for this odd culture is that of George H. W. Bush, who publicly pardoned a bird in 1989. On November 17th that year, Bush was gifted with a 50-pound turkey, as a group of 30 schoolchildren and ravenous reporters watched on. Noticing that the bird seemed anxious, Bush stated in front of the nation: ‘Let me assure you, and this fine tom turkey, that he will not end up on anybody’s dinner table. Not this guy. He’s granted a presidential pardon as of right now.’

While Bush Snr may not have intended to spark a cultural movement with his ad-libbing, America clearly took note of the charitable notion, and every Thanksgiving since then a turkey has been freed from a grizzly fate. So beloved is this quirky custom, that the birds themselves take on celebrity profiles of their own – we’ll focus more on that later. But for now: isn’t there something unsettling about this personalisation of poultry, especially considering that many of their comrades will still face certain death? And what exactly is the truth behind the pardons as we know them today? 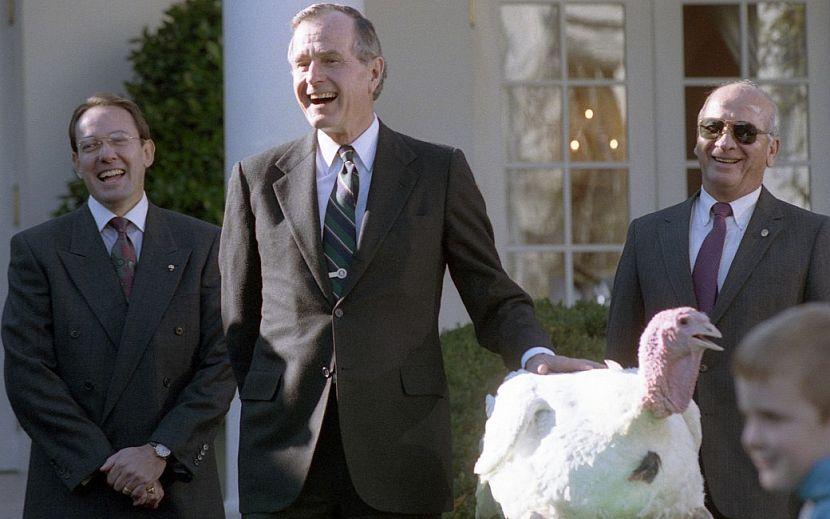 As with all matters handled at the White House, the management of livestock is not left to chance and so it should come as no surprise that there’s an official partner for poultry selection. The National Turkey Federation takes on the duty of shortlisting turkeys from ‘a specially-bred flock’ intended for the President – but you have to wonder exactly what this means. It’s safe to assume that all birds among the brood are bred in an identical fashion, so does this mean that each animal among them is fed to grotesque excess (just in case they make it onto America’s collective plate), or is this flock considered generally too aesthetic to be eaten after all? Either way, the very idea of an animal being purposely cultivated for such unnatural intentions is enough to make one’s stomach turn.

Further to the Federation’s duty, is to ‘train’ the shortlisted birds for their moment in the spotlight. So after ruthless selection process (in which some bird’s lives are deemed more valuable than others), the turkeys are then subject to a number of tasks designed to ensure that their moment with the president is as problem-free as possible. These tasks include exposure to bright camera lights, as well as sitting the birds upon pedestals surrounded by bustling crowds – what it is that the Federation seeks here, is the bird’s ability to remain collected and docile in all events. Just in case they were to spook or embarrass the president by acting like, y’know, birds.

After an overt amount of stress, the feathered finalists are then put before a group of judges: typically, a school of young children. And it’s here where things get especially upsetting. These children, raised on a slew of Disney movies designed to teach compassion to all creatures, are instructed to select which two turkeys they like the best, and to then give the birds a cute nickname. To some, this may seem like a wholesome and inclusive opportunity for the children…but when you consider how kids anthropomorphise animals from a young age, asking them to favour two birds over the rest and to really personalise the ‘best ones’ by giving them names, the whole thing begins to feel more than a little uncomfortable. 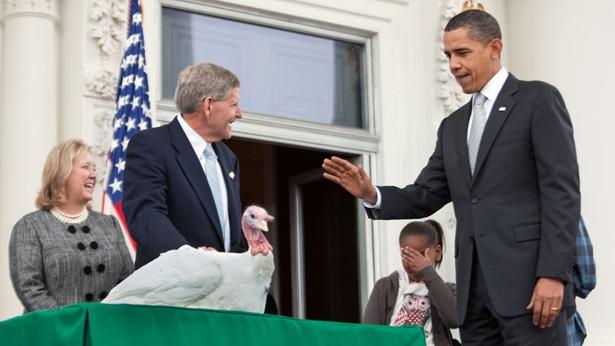 And it only gets worse. A recent addition to the turkey-pardoning process, is to create a presence for the animals on social media. Last year’s ‘winners’, Honest and Abe, both had Instagram profiles created in which to push this strange tradition…profiles complete with such information as their height, wingspan, and even their love of country music. I know, how all-American. But to plump up, name, and train a turkey is odd enough – yet treating them like celebrities feels especially wrong.

The holiday may be intended to be good fun, but there’s nothing funny about over-gorging these birds in preparation for your family dinner, just to taunt them further by parading them around in popularity competitions. And while Bush Snr’s initial ‘pardoning’ may have endeared the nation, the tradition itself has become a monster of its own – so isn’t it time to put an end to it all? Aren’t we ashamed of the fates we enforce on these poor, over-bloated birds? We do, after all, subject them to only two options: to be plumped up for our plates, or to be paraded around for our own entertainment…only to succumb to an alternate (but equally unfair) outcome somewhere down the line. The vast majority of pardoned turkeys suffocate shortly after the cameras stop rolling, unable to carry their own weight and struggling to breathe due to their own abominable girth.

Now, before you fear that we’ve sucked the joy out of the season: nobody is asking you to stop celebrating. Keep feeding your families, and making toasts to all that you’re grateful for. The festivity of Thanksgiving is something America should, rightfully, be very proud of: there’s a multitude of wonderful things that happen around this holiday, whether it’s spending pertinent time with loved ones, or making vast charitable contributions. Every Thanksgiving, many organisations receive generous donations of non-perishable/canned food stuffs intended to be given to those in need, and the Salvation Army is always inundated with volunteer applications around this time of year. Many Americans are wonderfully compassionate, and it shows – so maybe we can extend our benevolence to animals, too. And as you sit down to your Thanksgiving dinner, spare a thought for less fortunate out there…from the poor and the homeless, to the millions of animals affected each year as a result of our pastimes.