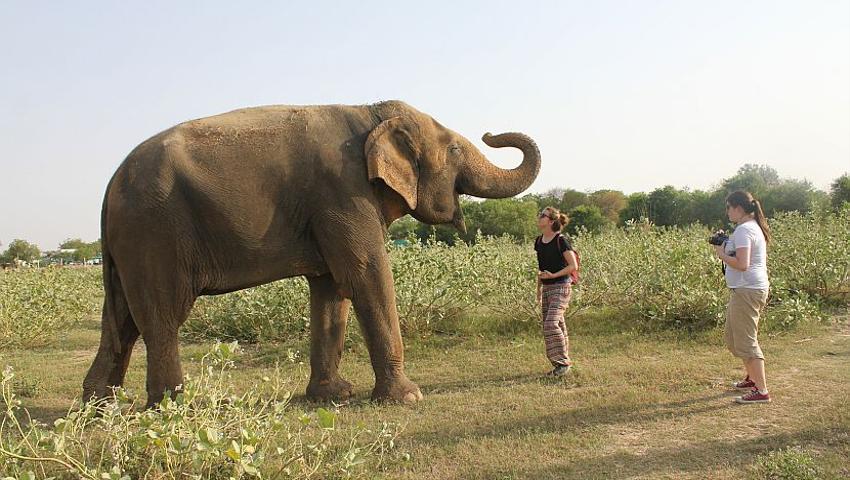 Some of you may have heard of the story of Raju, an elephant in India who has thankfully been rescued from 50 years of abuse and suffering.

Raju has arrived at his new home at midnight of July 4 after being rescued by 'Wildlife SOS', a fantastic charity who we partner with on our 'Highlights of India' voluntour.

Thanks to the fantastic work of 'Wildlife SOS' and the many people who have sent in donations for his rescue, his chains and spikes have been removed from his legs. He is now in a recovery pen at Mathura Elephant Rescue Centre (visited on the 'Highlights of India Voluntour') with lots of delicious fruits, treats and lush green grass. Finally Raju is able to have the life that he deserves!

Media coverage has been extensive for Raju, and it is fantastic that his plight has been highlighted. We were particularly happy to hear about Raju meeting one of the females, Phoolkali, in the Daily Mailyesterday morning!

'Wildlife S.O.S', the fantastic charity behind this and countless other animal rescues, are our charity partners on our 'Highlights of India' voluntour, Below follows their photo account of his rescue:

"We don't have a lot of information about Raju's earlier life. We believe he was probably born in the wild almost 50 years ago and when he was just a baby, caught and sent to live his life as a working elephant. He has spent almost 50 years in chains and most likely would have died never known freedom. However, on July 4th, Raju took his first steps as a 'free' elephant because of your support.

Raju had been working as a begging elephant in Allahabad. People would give the mahout tips in exchange for 'blessings' by Raju. Most of the food he got was inappropriate for an elephant. However, half starving, Raju would eat almost anything.

Raju was chained with spike chains that made walking and movement very painful and left him with chronic wounds around his legs. One of the things that bull elephants suffer from is the 'training' method, so dear to mahouts and justified by time and tradition. Each time the handler of an elephant changes, the new owner wants to be able to control the elephant and begin earning from his new acquisition at once. The new mahout ties up the elephant by all four legs, stretching out his limbs, and then submits him to sound beatings which last over several hours. Apparently this is the sad way in which a frightened animal is made to accept his new master. If the elephant is a bull elephant, he is shackled, usually with spiked anklets and kept chained continuously to make sure he learns to 'respect' the new mahout. Raju has all his life worn spiked chains and our investigation shows that these had dug deep into his flesh and created cuticular abscesses and bad wounds. And his mahout habitually carried a spear with which he would prod Raju in sensitive regions to hurry him up when on the road – awful behaviour, but sadly, true. 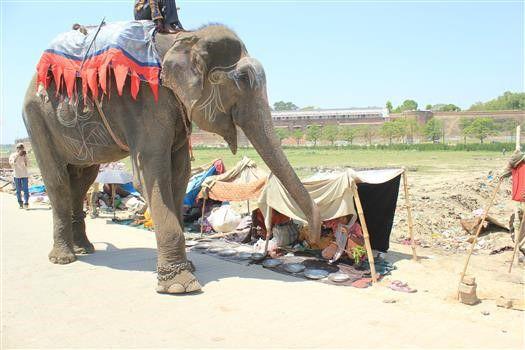 Raju's life of 50 years begging all day in the hot heat with very little to eat was taking a terrible toll on him. He appeared to us to be exhausted and worn down. We worked with the U.P. Forest Department to get the permissions to have him transferred to 'Wildlife SOS' and we asked you to help us rescue him. 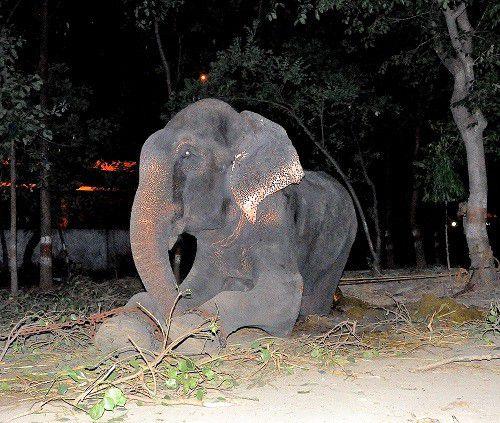 His rescue mission began on the night of July 2. His mahout and previous owner were non-cooperative and made things very difficult to rescue Raju. They put more chains on him and pulled the spikes tighter and then had people blocking the roads leading to the rescue truck. 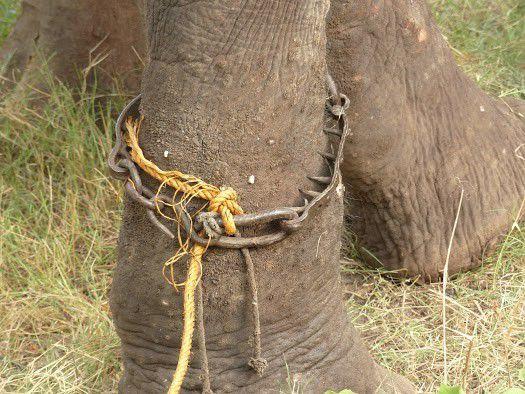 After Raju had been traumatized by his owners, we worked hard to gain his trust. After several hours of giving Raju fruits and encouragement, he was able to get loaded onto the truck. 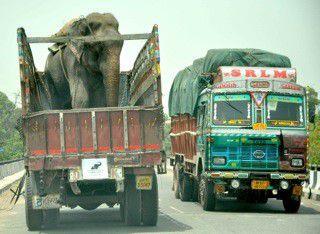 Raju gets closer to his new home 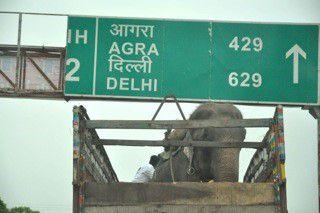 Dr. Yaduraj, the veterinaian rides on top of the truck to keep an eye on Raju. 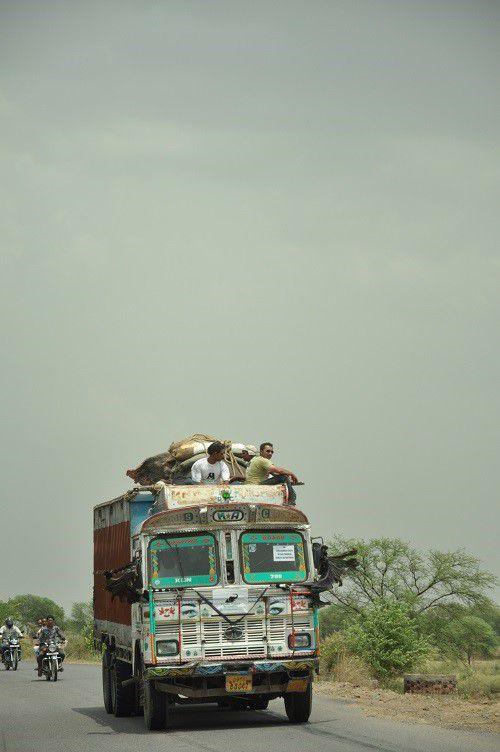 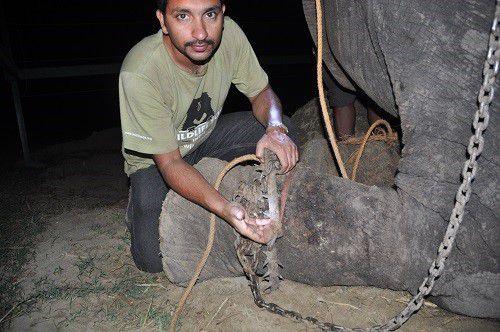 Now that Raju is free, the process of 'healing' him begins. Here he takes a walk chain free holding a few bananas for a snack. 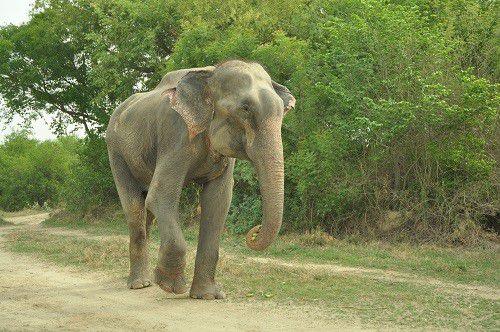 Here he gobbles jackfruit. We literally bought a truck load of the fruit for him! 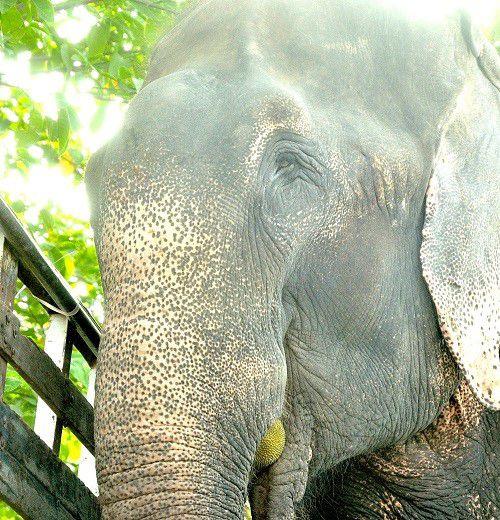 His body is covered in abscesses and wounds from beatings he received and from the chains. Treatment begins to heal these wounds. 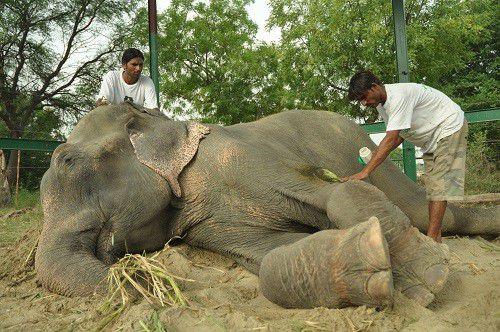 Raju rejoices in having a cold shower! 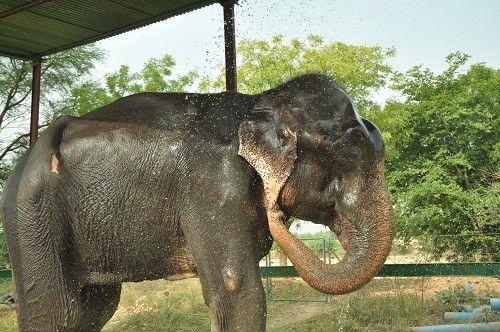 More than anything... now is a time for Raju to just rest... after 50 years, he completely deserves it!" 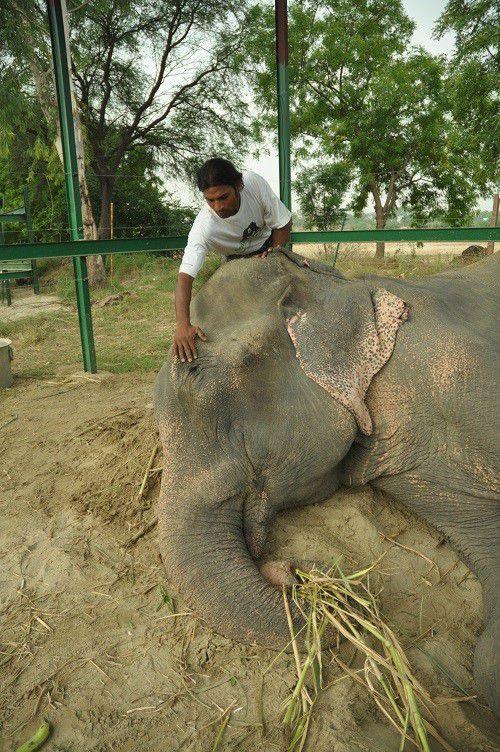 Thanks to 'Wildlife SOS' for providing us with these incredible photos – we are so glad that Raju is now safe to live out his remaining years in peace – with some attention from the females in the centre of course!

'Wildlife SOS' still needs help with donations for Raju and for the other elephants in the centre. Your donations can help to provide the much needed equipment:

1 generator: Currently it takes charity staff 18 hours to fill the pool because othe generator does not work. A generator would benefit all of the elephants!

1 small tractor: Charity staff create dirt mounds for our elephants that have a difficult time getting up and down and it is more comfortable for the elephants to lay on mounds of dirt... especially the skinny ones like Raju! If the charity had a small tractor, it would be much easier to create these dirt mounds that are essential for the elephant's comfort and welfare.

Please help by giving your donations here or go one step further and get involved in elephant conservation today!